Great rates at the Iberostar on Park Avenue

New York LaGuardia Airport is located in the Borough of Queens, east of Manhattan. The main terminals of LaGuardia Airport are served by four bus lines. Route Q70 is the main bus used by out of town visitors which meets the NYC subway system in Jackson Heights Queens. The map below was previously shown on the subway map from the MTA web site. 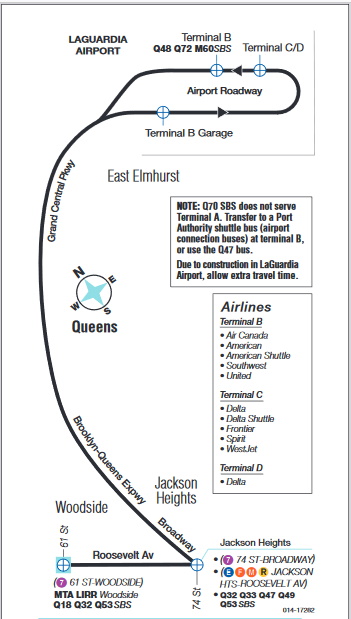 The buses require exact change (no bills accepted) or a METRO card to pay the fare. METRO cards are available from a machine in baggage claim. A METRO card allows you to make a free transfer to the subway.

I recommend using Google maps to find your route from Jackson Heights to your destination.

If you have too much luggage to use public transportation, we have private car and shuttle service here.

Highlights of things to do in New York.