Kennedy Airport is east of Manhattan on the ocean side of Long Island.

Kennedy Airport has a train system that connects the eight passenger terminals and other locations. Service is free between terminals. There is a $5.00 charge for the JFK train, if it is used to connect to the New York subway or Jamaica Long Island Railroad station.

It is possible to ride several city bus lines from the airport to connect with the subway system and avoid the $5.00 charge. The main bus stop is located in front of Terminal 4 which can be reached by the JFK Train without charge. Take the Q10 bus for the easiest conections to several subway lines. The image below is from the Q10 schedule on the MTA web site. 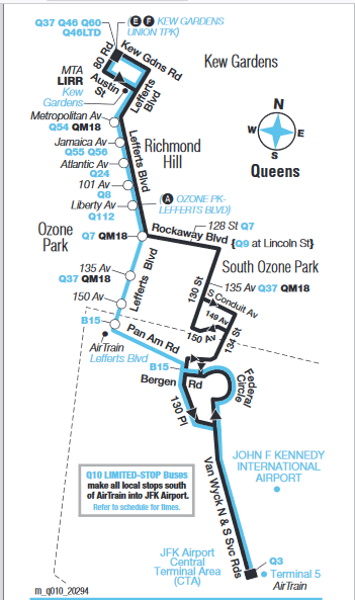 The buses require exact change (no bills accepted) or a METRO card to pay the fare. A METRO card allows you to make a free transfer to the subway.

BACK TO HOME PAGE